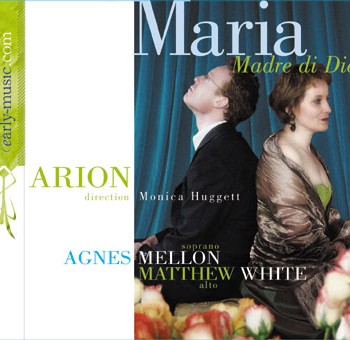 The recording features 4 works dedicated to the Virgin Mary (2 in Italian, 2 in Latin). The soloists are accompanied by a luscious 15-piece orchestra.

The voices are gorgeous, and perfectly matched. But ultimately it’s the conjunction of sensual beauty and intense sorrow that floors the listener. – Tamara Bernstein,The National Post (Canada).

Much of the credit for this must go to Monica Huggett, who directs Arion to play brilliantly, emotionally, and with impeccable style. Recordings of these ‘Handel’ works are few and far between, so this early-music.com release is of obvious interest to collectors. But, far more importantly, this is an exceptionally fine recital of baroque sacred vocal music that deserves all the recognition it can get.  – David Vickers, GF Handel.org (England)

French soprano Agnès Mellon entered in 1980 successively at the Chapelle Royale, directed by Philippe Herreweghe, and at Les Arts Florissants, directed by William Christie. Her career as a soloist has led her to sing under the direction of many noted conductors, such as Gardiner, Malgoire, Koopman, Leonhardt, Sigiswald Kuijken, and René Jacobs.

Agnès Mellon has performed in some of the world’s most prestigious concert venues, such as the Opéra de Paris, the Théatre des Champs-Elysées, the Salle Pleyel, Carnegie Hall, as well as the Amsterdam’s Concertgebow and Opera and numerous halls in Japan.

Agnès Mellon created her own ensemble “Barcarole ” with harpsichordist Kenneth Weiss and can be thus given to her passion: chamber music with voice. She is accompanied, in her recitals of Lieder and French melodies by various pianists: Claude Lavoix, Jean-François Heisser, Marie-Joseph Jude, Billy Heidi, François Kerdoncuff, Christian Ivaldi and Laure Colladant with the pianoforte. Her discography (over a hundred recordings) covers a broad repertoire.

She is frequently invited as a guest of the academy of French Music in Kyoto, where she gives masterclasses with the professors of the CNSM of Paris. 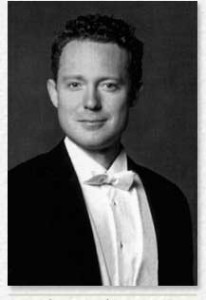 Matthew White was born in 1973 and began singing as a treble with St.Matthew’s Men and Boys Choir in Ottawa, Canada. He graduated in English Literature at McGill University and currently studies with Jan Simons in Montreal. His singing career has already taken him all over North America, to Europe, South America, Asia, and New Zealand. Upcoming operatic engagements include work with Glyndebourne Festival Opera, the Houston Grand Opera, and Chicago Opera Theater. He has also worked for Glyndebourne Touring Opera, Cleveland Opera, Opera Atelier, and Pacific Opera Victoria.

We would like to thank André Guimond for his overwhelming devotion.

The sheet music of the HWV 230 and HWV 234 cantatas were generously given to Arion by Dominique Visse, who has prepared and edited these works using the manuscripts.

© Ensemble Arion, 2001 under exclusive license with Les Productions early-music.com inc. Made in Canada