Spider: Everybody knows that lights are notes. Light, light, is just a vibration of the note, too. Everything is.
Monica: That one note makes everything else so insignificant.
– Frank Zappa, A Different Octave, Civilization Phaze III 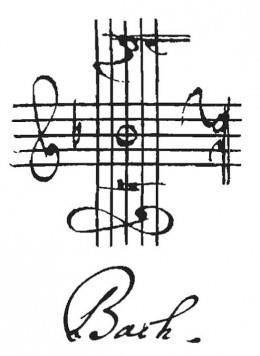 Today, Johann Sebastian Bach (1685-1750) shines from atop Parnassus as the most brilliant composer in history. But during his lifetime he was celebrated less for his skills as a composer than for his prowess as a keyboard performer. Unfortunately, at the time of Bach’s death in 1750 sound recording technology lay far in the future. But it is still possible to hear faint echoes of his playing from accounts by his contemporaries, and by bringing his scores to life with our fingers.

There are many contemporary accounts of Bach’s great keyboard abilities. Two are especially eloquent: his obituary written by his son, Carl Philipp Emanuel and his student, J.F. Agricola, and his first biography, published by Johann Nikolaus Forkel in 1802. These accounts give us some idea of the brilliance of his playing. His obituary says proudly, “We cannot be reproached if we are bold enough to persist in the claim that our Bach was the most prodigious organist and keyboard player that there has ever been.”

Born into a family of musicians in 1685, he was first taught the violin by his father. When he was ten years old both his parents died and his older brother, Johann Christoph, took him in. Johann Christoph, who was an organist, gave the young Sebastian most of his keyboard training. Bach never received academic training in composition. Rather, he acquired his knowledge of counterpoint and harmony by studying the works of others. His influences were the keyboard works of notable German composers such as Reincken, Pachelbel, Böhm, and Buxtehude. Works by Italians such as Steffani, and Frenchmen such as Marais and Lully rounded out Bach’s early education. Later, his horizons expanded to include keyboard works by Frescobaldi and instrumental works by Albinoni, Corelli, and Legrenzi, several of which he transcribed for keyboard. He is known to have admired the French instrumental music he heard during his teens. He studied the keyboard
works of D’Anglebert, Lebègue, Dieupart and de Grigny. He also studied notable composers of previous generations, including Palestrina. In his 20s, he discovered the concertos of Vivaldi which profoundly influenced his conception of musical form. Throughout his career, Bach went to great lengths to acquaint himself with the works of his German contemporaries, including Telemann, Graun and Handel as well as French and Italian composers.

Bach’s ability as a performer blossomed early, gaining him his first appointment as an organist when he was eighteen. By the time he was twenty-three he was organist at the ducal court of Weimar, becoming concertmaster there in 1717. Numerous concerts from this period are
documented. His compositions from those years and the improvisations that inspired them must have made up a large part of Bach’s concert repertoire. A relatively large number of surviving copies attest to the success of these pieces. The obituary states that Bach’s early works share two roots: his rapidly growing skill as keyboard virtuoso and his “observation of the works of the most famous and proficient composers of his day.” Bach’s early keyboard works balance a variety of elements taken from his models: technical virtuosity, free composition, strict polyphony, and expressive, often unconventional harmony.

By the end of his tenure in Weimar (1718), Bach had achieved great acclaim as a keyboard virtuoso. Forkel says that in his improvisations he was known “to run or leap up and down the instrument, to take both hands as full as all the five fingers will allow and to proceed in this wild
manner till he by chance finds a resting place.” Not all concert pieces were improvised. Carl Philipp Emanuel divided his father’s work into two broad types: “those for which he took the material from improvisations at the keyboard” and those which were “composed without instruments, but later tried out on one.” He frequently performed a composed piece before beginning his improvisations as a way of warming up his imagination.

The works heard on this CD were chosen to highlight the range of works Bach performed over the course of his life, from the early Toccata in E minor to a movement from the Musical Offering published in 1747, just three years before his death. They feature both works “for which he took the material from improvisations,” and those “composed without instruments.”

The Toccata in E minor, BWV 914, is known only from manuscript copies made from a lost original. Its date of composition is uncertain but Bach is thought to have written it in his 20’s. Free, improvisatory sections alternate with a strict double fugue and with a virtuoso fugue in three voices. The broken chords of the Adagio show the influence of Böhm’s keyboard suites (themselves inspired by French models), while the final fugue appears to be a reworking of a piece by an unknown Italian composer.

Forkel talks about Bach’s fluid keyboard technique and his mastery of harmony: “When he played from his fancy, all the 24 keys were in his power… His Chromatic Fantasy… may prove what I here state. All his extempore fantasies are said to have been of a similar description
but frequently even much more free, brilliant, and expressive… This fantasia is unique, and never had its like.” He is speaking of the Chromatic Fantasy and Fugue, BWV 903. It is indeed a piece without parallel. Bach likely wrote it at some point during his years in the service of the Prince of Anhalt-Cöthen (1717-1723). Bach is known to have brought a magnificent two-manual harpsichord by Michael Mietke from Berlin to the court of Cöthen in 1719. He may have written the Chromatic Fanstasy, along with the extravagant harpsichord cadenza from the fifth
Brandenburg concerto, to show off the new instrument. Bach appears to have revised the piece during his time in Leipzig (1723-1750) and may have performed it at the public Collegium Musicum concerts he organised from 1729 on. Clearly rooted in improvisation, the Chromatic Fantasy may well illustrate Bach’s extempore playing that so impressed his contemporaries.

The Fantasia in C minor, BWV 906, is known from two different autograph versions, both ‘fair copies’ made in preparation for publication or presentation to a patron. It is in two sections, much like one of Domenico Scarlatti’s sonatas, and features hand crossings, arpeggios, ascending and descending chromatic scales, and a recapitulation of the opening material. One copy appears to date from between 1726 and 1731, the period when Bach was publishing the suites that make up the first part of his Clavier-Übung. A binary sonata such as this was music in the most up-to-date style and perhaps Bach considered this movement for the opening of the 2nd Partita before choosing a different piece. The other version of this Fantasia, which includes an incomplete fugue, dates from around 1738, when Bach was compiling the second book of the Well-Tempered Clavier. Perhaps Bach was considering it for inclusion, before abandoning it in favour of the C minor Prelude and Fugue that has come down to us.

Since Bach entertained the notion of pairing this Fantasia with a fugue, I have chosen to follow it with a fugue from the last decade of Bach’s life, the three-part Ricercar from the Musical Offering. This collection, published in 1747, is one of Bach’s few instrumental works whose origins and purpose can be pinpointed. It arose from Bach’s visit to the court of Frederick the Great in May, 1747, perhaps to visit his son, Carl Philipp Emanuel, a member of Frederick’s musical establishment. Upon arrival at Potsdam, Bach was summoned to perform for the King during the evening chamber music concert. The King, himself a musician, gave Bach a theme on which to improvise, which, as the obituary tells us, “he at once performed on the fortepiano, to the particular delight of the sovereign… On his return to Leipzig, he set down on paper a three-part and a six-part ricercar, so-called, with some other artful pieces on the very theme given him by His Majesty; and dedicated it, engraved on copper, to the king.” This collection, The Musical Offering, was artfully calculated to impress one of the most powerful of Europe’s rulers. It is simultaneously up-to-date and stylish yet learned and scientific in character, well-tailored for one of the most important patrons of science and learning in Enlightenment Germany.

The Overture in the French Manner, BWV 831, was published in Leipzig in 1735 as part of the second volume of the Clavier-Übung. Bach seems to have intended this series as an encyclopedic overview of all possible forms of keyboard composition. Part II demonstrates the possibilities of the Italian instrumental concerto and the French orchestral suite as rendered in solo keyboard transcriptions. The Overture, perhaps influenced by the monumental Huitième Ordre of François Couperin’s collection of 1717, represents the culmination of Bach’s encounters with French music and captures the most essential elements of French harmony, rhythm, ornamentation and form. Unlike similar publications by other composers, the pieces of Clavier-Übung were not destined for amateurs, and had a reputation for both excellence and technical difficulty. It is likely that Bach performed this suite himself in some of the many concerts he gave during the 1720s and ’30s including the Collegium Musicum concerts, and the piece might well have figured in a concert he is known to have given in Dresden in 1736.

As the obituary says, “How singular, how new, how expressive, how beautiful were the ideas that occurred to him when improvising! How consummately he brought them to fruition!” Until it becomes possible to travel back in time, we can only imagine the effect of Bach’s playing, helped by the endlessly thrilling and beautiful works he committed to paper.

A note on the Musical Cross.

The Musical Cross shown above is actually a musical spelling of Bach’s name. In German music notation, it is possible to spell B-A-C-H using notes on the staff. The note called ‘B-flat’ in English notation is B in German, and the note called ‘B-natural’ is H. Bach occasionally embedded his name as a melody in his work:

If one uses different clefs, it is possible to use the same note for each note name. In the Musical Cross, above, starting from the left side and going around clockwise, the first soprano clef with B-flat names the note in the middle of the staff as ‘B’; the next, tenor clef, names the same note as ‘A’, on the right-hand, the alto clef names it ‘C’, and the final, soprano clef with no flat in the signature, names it ‘H’. So looking at that one note from all sides, we can find Bach…