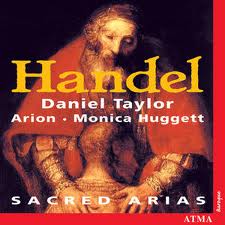 Music and songs from some of Handel´s best loved “English Oratorios” – the pop songs of their day.

Arion delivers a polished performance while giving every support to Dan Taylor who gives of his best – a joy to experience.

…the instrumental overtures and sinfonias that serve as preludes to arias from ‘Saul’, ‘Soloman’, ‘Messiah’ and ‘Theodora’ are every bit as captivating as Taylor’s dulcet, elegant singing. Huggett’s solo in the allegro from ‘Saul’ is one highlight…..this ensemble sems to have more colours in its palette than most…    – Elissa Poole, Canada, The Globe and Mail, October 2001

Arion is a member of early-music.com, a site committed to the promotion of some of the world’s finest early music artists..