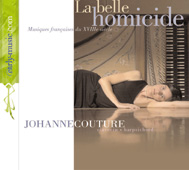 With this recording titled La belle Homicide, Johanne Couture creates a soft atmosphere, perfectly adapted to this French repertoire that features lute music transcribed for the harpsichord, a regular practice during 17th-century France. Her interpretation of these works is both elegant and refined. A recording that will transport the listener to another era, so far from the maddening rhythm of the 21st century. Works by Louis Couperin, Gallot, Gaultier, Chambonnières, and others.

***** GOLDBERG 5 STAR *****
Ms. Couture plays with great taste and control and a natural feel for the style brisé which is so prominent in these pieces. Contrapuntal textures also have great clarity and ornaments are well-placed. This is an entreprising programme, illuminated by a thorough essay (English and French), which makes very agreeable listening.
David Hansell, Early Music Review, March 2004
Category: Johanne Couture

Pieces in a minor

Yves Beaupré Harpsichord, completed in Montreal, 1985
The original instrument, signed ‘Vaudry, 1681’, is housed at the Victoria and Albert Museum in London.

The only instrument by this seventeenth-century Parisian artisan to have survived into our time. A delicate casing, a design not yet influenced by the generous proportions of eighteenth-century instruments, a warm and intimate tone. . . the elements that combine to produce instrumental ambrosia. Be that as it may be, its noble nature delivers peace to the soul. It is built with a casing of walnut wood, thicker than Italian harpsichords but considerably more delicate than Flemish instruments. The stand in the style of Louis XIII is joined to moulded bridge, and a fairly short ÉCHELLE DE CORDES borrowed from the Italian school. This ÉCHELLE, in particular, diverts the majority of stress away from the casing and plays a defining role in the instrument’s sonorous qualities. Common during the seventeenth century, this model provides us with a glimpse of future, more voluminous instruments characterized by qualities truly particular to the French nation.

Johanne Couture would like to thank the Social Sciences and Humanities Research Council of Canada (SSHRC) for its financial support which has made the production of this recording possible.

Johanne Couture wishes to thank Pierre-Richard Aubin, Yves Beaupré, Hank Knox and Claudia Berardi for their support during the production of this recording.

We would like to express our deepest appreciation to Mrs. Phyllis Lambert and the Canadian Centre for Architecture for permission to use the Paul Desmarais Theatre for the cover photos.