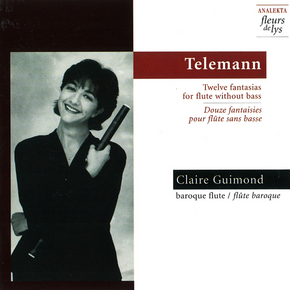 Admired unconditionally by Quantz, who held these Fantasies to be exemplary, surpasing even the works of many of the great virtuoso flutists of the time, Telemann has handed down to us one of the most inventive, musically original pages in the entire flute repertoire.
Claire Guimond offers us her own sensitive and musical interpretation – one to rank with the very best.

Guimond’s impeccable phrasing, loving, warm tone, and superb breath control are shown off to their best advantage in the wonderfully free writing of Telemann’s Fantasias. Guimond pays painstaking attention to each note in the exacting contrapuntal filigree erected by the composer, yet every nuance of emotion is presented with disarming ‘naturel’.
Hour (Canada)

Guimond’s playing is poised. She maintains a noble line in rapid as well as slow passages, and while her replica baroque instrument is soft-toned, it has the resonance to suggest larger forces where this effect is desired …  A highly civilised disc.
The Gazette (Canada).

Although I am a great admirer of Telemann’s music, I hesitated long before buying this CD, … the reason being that I feared that almost an hour of music for flute solo might be boring. However, because I had enjoyed so many of Claire Guimond’s recordings with the Arion Ensemble, I decided to give it a try … and discovered that I had waited far too long! I have just listened to this CD twice straight through, and I can assure you there is not the slightest risk of boredom here!
Leslie Richford, Reviewer

Claire Guimond belongs unequivocally amongst the great…(She) stands out as a flautist to be reckoned with henceforth     – Alexis Kossenko, Répertoire des disques compacts, France, February 1997

THE INSTRUMENT
Baroque flute by Alain Weemaels 1983, after an original by Rottenburgh.