Jean-Henry D’Anglebert published his only collection of music two years before his death : in addition to his own compositions, he included transcriptions of orchestral pieces by the famous Jean-Baptiste Lully. On this disc, Hank Knox makes the clavecytherium sound like a full orchestra, rich with colours and surprising sonorities. An important disc for all lovers of the harpsichord as well as for those passionate about the age of the Sun King.

Hank Knox has a well-cultivated feel for his repertoire and there is a real sense of enjoyment in his playing, this understanding and enthusiasm being also communicated in his helpful notes.
David Hansell, Early Music Review (United Kingdom), March 2004

‘The harpsichord is a complete instrument by virtue of its range, and sufficient unto itself. However, as one can neither swell nor diminish its sounds, I shall always be grateful to those who, by consummate skill supported by good taste, are able to render this instrument capable of expression. Such was the task my ancestors set themselves, quite apart from the fine quality of their pieces; I have endeavoured to perfect their discoveries, for their works still appeal to persons of refined taste.” – François Couperin, Pièces de clavecin, Paris, 1716.

The instrument :
Clavecytherium Yves Beaupré, opus 100, Montréal 2002 Collection Jacques Dansereau
After an instrument by Albertus Delin (1712-1771) built in 1768, kept at The Hague Museum 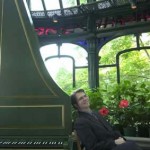 Hank Knox studied harpsichord with John Grew at McGill University in Montreal and with Kenneth Gilbert in Paris. He has given numerous harpsichord recitals, and is a founding member of Ensemble Arion, with whom he has toured Canada, the United States, Europe, South America and Mexico.

He has also performed and toured with the Tafelmusik Baroque Orchestra and le Studio de musique ancienne de Montréal. He plays regularly with the Orchestre symphonique de Montréal.

His wide discography includes some 15 recordings with Arion, as well as solo and chamber music collaborations, including a recording of Frescobaldi’s keyboard works on an Italian harpsichord of 1677.

We would like to express our deepest appreciation to Mrs. Phyllis Lambert and the Canadian Centre for Architecture for permission to use the magnificent Shaughnessy House for the cover photos.

© Hank Knox, 2003 Under exclusive license with Les Productions early-music.com inc. Made in Canada