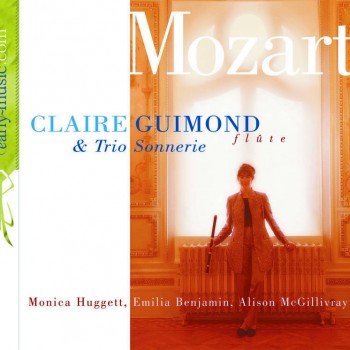 One of Canada’s most sought-after flautists, Claire Guimond proudly introduces her version of Mozart’s four flute quartets. A most interesting mixture of dreamyness and humour is presented, on what is destined to become a truly important recording. An impeccably engineered product and extremely well performed – totally imbued by the warmth and softeness of Claire Guimond’s baroque flute which has become a real trademark for this outstanding performer.

Guimond is a graceful and bold artist whose fluidity is complemented by keenly articulate speech. She claims ample airiness and agility.
Donald Rosenberg, Gramophone, April 2004 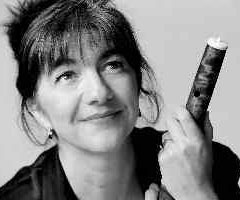 Claire Guimond has established herself as a leading baroque flautist, first in Canada and more recently on the world scene. She is based in London and Montreal.

Claire is a founding member and Artistic Director of Arion Baroque Orchestra, with whom she has frequently toured North and South America and Europe for the past thirty years. She has performed under such distinguished conductors as Philippe Herreweghe, Monica Huggett, Andrew Parrot, Jaap ter Linden, Bruno Weil, Nicholas McGegan, Ton Koopman et Jordi Savall. She made her London debut at the renowned Wigmore Hall in 1998 with violinist Catherine MacIntosh and now performs regularly in the UK.

Her recordings with several labels are distributed world wide and have been praised by the international musical press. Her version of the sonatas by Joseph Bodin de Boismortier, with harpsichordist Luc Beauséjour, earned a 10/10 in the French Magazine ‘Repertoire’. The same magazine has rated her solo recording of Telemann’s Fantasias as one of the two definitive versions: the other being an interpretation recorded by her former teacher Barthold Kuijken in 1978.

Sonnerie is one of the foremost period instrument ensembles in the world. Founded by Monica Huggett in 1982 and based in London, the group has been acclaimed for its performances from Sydney to Paris and from Helsinki to Vancouver, as well as its quarterly series at London’s prestigious Wigmore Hall.

Sonnerie recently extended its repertoire into the classical era by performing Mozart Piano Quartets, with Gary Cooper on the fortepiano, and in January 2000, Sonnerie recorded the Quartets, again for the ASV label. This in itself was a pioneering exercise as it is the first ever recording of the contemporaneous piano quartet arrangement of the Quintet for piano and winds.

Monica Huggett and Sonnerie are a members of early-music.com, a site committed to the promotion of some of the world’s finest early music artists.

We wish to thank the directors of the Château Dufresne in Montréal for allowing us to take pictures for the cover art.

© Claire Guimond 2001 under exclusive license with Les Productions early-music.com inc. Made in Canada