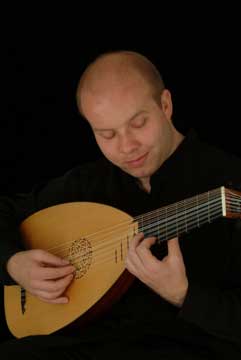 Matthew Wadsworth, lutenist, is in great demand as a soloist, continuo player and chamber musician. He has appeared at major festivals in the UK, Europe and North America and can frequently be heard on radio, both in live performance and on disc.

Matthew is delighted to have recently been taken on as a solo artist by Channel Classics, and their first collaboration, ‘Masters of the Lute’ was Editor’s Choice in Gramophone Magazine, December 2006.

Matthew studied lute with Nigel North at London’s Royal Academy of Music, winning the London Student of the Year award in 1997 for his work on the development of Braille lute tablature. He spent a year at the Royal Conservatory in The Hague and now has a post at the Royal Welsh College of Music and Drama in Cardiff. He is also a founder member of Ricordo, which has earned a reputation for its flamboyant performances of seventeenth century music. Wadsworth was recently made an Associate of the Royal Academy of Music and was nominated by The Independent as a “Rising Star for 2005”. He is also Musical Ambassador for Britain’s National Talking Newspapers and Magazines.

Recent engagements have included the Wigmore Hall, Purcell Room, the Georgian Concert Society (Edinburgh), the Metropolitan Museum of Art (New York) and the Lufthansa, Beverley, Spitalfields, Budapest, Vancouver, Mitte-Europa and Innsbruck festivals. Matthew has also worked with The Academy of Ancient Music, English Touring Opera, Birmingham Opera Company, The Netherlands Bach Society, I Fagiolini, The English Cornett and Sackbut Ensemble, The Musicians of the Globe, Arion, Constantinople and The Theatre of Early Music, among others.

Matthew Wadsworth is a member of early-music.com, a site committed to the promotion of some of the world’s finest early music artists.

Additional discography for Matthew Wadsworth, not available for sale through the early-music web-site, can be found here..