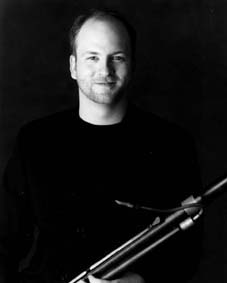 Mathieu Lussier is one of the most active early music bassoonists in North America. He is called upon to act as principal bassoon with such ensembles as Ensemble Arion (Montreal) ,Les Violons du Roy (Quebec City) and Apollo’s Fire (Cleveland). He is also frequently invited to play with groups like Tafelmusik Baroque Orchestra (Toronto) and the Boston Early-Music Festival.

He teaches Baroque bassoon at McGill University and modern bassoon as the Université du Québec à Montréal. Also very active as a chamber musician, being member of Ensemble Pentaèdre of Montreal, the Caliban Quartet of Bassoonists and Musica Franca.

His solo recordings include the Concerto for oboe and bassoon in G major by Vivaldi, the first available recording of Graupner’s Concerto in B flat major, Telemann’s Concerto for 2 flutes and bassoon as well as a CD devoted to Michel Corrette with the gamba duo Les Voix Humaines. In the past years he has released CDs of François Devienne’s music for bassoon and strings, sonatas for bass instruments by Boismortier with Musica Franca and a disc of flute and bassoon concerti of Vivaldi, with Claire Guimond and Arion.

Mathieu Lussier is also a composer and his works are regularly performed in concert in Canada and in the United States. «Bassango» and «Valstango», for bassoon quartet, have been recorded by the Toronto Caliban Quartet; «Promenade à Venise», a commission by the Ensemble des Idées heureuses was premiered in Montreal in October 2003; «Old Spanish from Cuba» was greeted with much applause at its April 2004 premiere by the Tafelmusik Baroque Orchestra of Toronto. The «Five Caprices for bassoon», following their recording by bassoonist Nadina Mackie, were the subject of a master class at the prestigious Curtis Institute of Philadelphia.

Mathieu is a member of early-music.com, a site committed to the promotion of some of the world’s finest early music artists.

View Cart “VIVALDI – Chiaroscuro” has been added to your cart.

Additional discography for Mathieu Lussier, not available for sale through the early-music web-site, can be found here..